Previous 5 Next 5
Service Before Self -- Captains Band Together for Their Country5/7/2013
This wonderful story is courtesy of Apple Valley High School...

The 2012-13 Boys Swim and Dive season has come and gone. This year's varsity roster had six seniors and for most of them, their time together on a "team" was completed when the season came to a close. However, for captains Seth Berry, Jackson Scholberg, and Ryan Sentz, their time together as members of a team will continue beyond school. No, they have not selected the same college to attend. Instead, they all joined the National Guard as a means to serve their communities and their country. During the first weekend in May, the young men were at Camp Ripley for training. Each of the boys has given a brief synopsis of why they chose the National Guard: 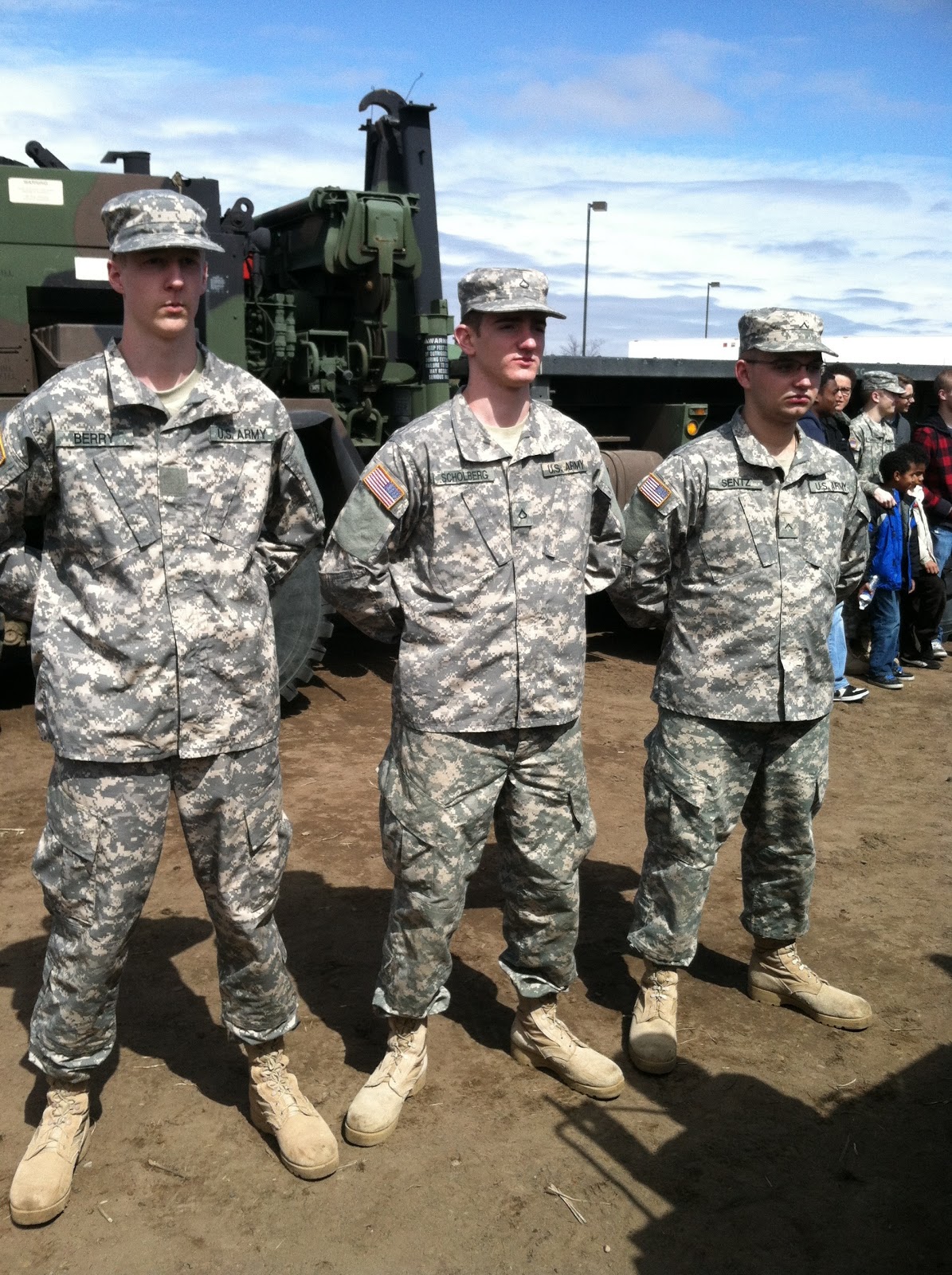 --Scholberg: "I joined the Army National Guard because it seemed the best way to give back to my community, a way to better myself as a person, and a good way to pay for college. Initially, I knew I wanted to go to college, but when looking at careers, there weren’t many choices that sounded exciting. The military was one of the few areas that sounded interesting. Serving part time in the Army National Guard allows me to be in the military while attending college full time. I plan to go to Iowa State and enroll in the ROTC program to become an officer upon graduation. I will major in computer science with a minor in music technology ” Jackson leaves for Fort Sill, Oklahoma for his basic training on June 11 and will start at Iowa State in the fall. (Pictured are Berry, Scholberg, and Sentz at Camp Ripley.)

--Sentz: “I joined the National Guard because I felt it was the right thing for me. I’m proud to be an American and wanted to serve my country.” Ryan will be attending Basic Training at Fort Jackson in Columbia, South Carolina this summer and advance training at Fort Sam Houston in San Antonio, Texas in summer 2014. At the end of his advanced training Ryan will be a Combat Medic. This fall, Ryan plans to attend North Dakota State University where he will study mechanical engineering.

--Berry: “I knew in my heart it was the right thing to do and I wanted to serve my country. The National Guard will help me with leadership and team building skills. I was already accepted to the University of Wisconsin, River Falls when I made my decision to join the National Guard. With already having 1 semester of college credits from attending PSEO, I have chosen to defer my college for one semester so I can do both my Basic Training and AIT training back to back. I will start college Spring of 2014 and study Health & Human Performance." Seth will leave for Fort Sill, Oklahoma on June 24th and then head to Fort Lee, Virginia September 10th.

While attending college, the young men will also serve one weekend a month and two weeks per year as part of their service. Apple Valley High School is fortunate to have such great leaders walking the halls and our nation is lucky as well. On behalf of AVHS, thank you to Ryan, Seth, and Jackson for their service to this great nation.
Two All-Time State Track And Field Records Fall5/7/2013
Tuesday was a big day in high school track and field, with two all-time state records falling...

--St. Francis senior Maggie Ewen broke her own girls state discus record with a throw of 175 feet, 9 inches in the Class 3A Section 5 True Team meet at White Bear Lake. Her previous record was 172-7.

--Lakeville South senior Lee Bares broke the boys state record in the pole vault with a height of 15-9 in the 3A Section 1 meet at Lakeville North. The previous record was 15-8, set by Moorhead's Macauley Spandl in 2010.

Ewen's 175-9 discus throw ranks No. 2 in the nation among high schools girls this season (the best throw is 184-2). Bares' 15-9 pole vault ranks No. 33 nationally among boys this spring the (the leader is 17-8 1/2).
Attention Athletes, Coaches, ADs, Officials, Fans …5/3/2013
As another stretch of bad weather rolls across much of our state -- resulting in more postponed and cancelled spring athletic events and contributing to what has become the worst spring in memory – I’m inviting everyone who is dealing with the conditions to pitch in and share your thoughts about the spring that never wanted to be sprung.

I invite you to send me emails (jmillea@mshsl.org) with your thoughts and I’ll compile your emails in a John’s Journal story …

--Athletes: How frustrating has this spring been as you work out indoors and wait for the weather to improve? Seniors, what has this spring done to your final season of high school athletics? And on the flip side for all athletes, have you had more time for things other than sports, such as studying?

--Athletic Directors: Does any previous spring compare to this one, in regards to trying to re-schedule events and find ways for your athletes to compete? How much time have you spent on this challenge, compared to other years? Is it a struggle to remain optimistic and encouraging for your coaches and athletes?

--Officials: You are sometimes the forgotten group in situations like this, but your lives and officiating schedules have been equally distrupted. What are the challenges you have been facing in trying to keep up with postponements and cancellations and the re-scheduling of events? Are you doing anything to keep your skills sharp?

--Fans: How have your lives been disrupted, especially if you are parents of athletes? How have you been encouraging your athletes to remain positive? And finally, what are your keys to staying warm and dry when watching outdoor events in, uh, less-than-ideal conditions?

Please send your emails to jmillea@mshsl.org … and keep your fingers crossed for better weather!

*Schools/teams John has visited: 614
*Miles John has driven in the Toyota Camry: 8,510
(*During the 2012-13 school year)
Follow John on Twitter: @MSHSLjohn
Snow, Rain, Mud, Slipping, Sliding: Perfect Lacrosse Conditions 5/2/2013
On a daily basis, I scan a whole bunch of high school athletic schedules and calendars in an attempt to make plans. Some plans are down the road a week or two or three and some are immediate. The latter was the case Wednesday, with predictions of snow on May Day.

I assumed that baseball and softball games would be wiped out by the rain that fell most of the day, and this assumption turned out to be accurate. My thoughts turned to lacrosse, with the realization that lacrosse players are rough and ready when the conditions are far from perfect. The Suburban East Conference had a full slate of boys lacrosse games on Wednesday’s docket, but one stood out: Forest Lake at Hastings.

That game stood out because it was going to be played on natural grass. The Hastings lacrosse field, on the grounds of the high school, is bare bones (no bleachers, no scoreboard) and I guessed it would be a perfect setting for what I envisioned: Lacrosse in the snow and the mud and the muck.

And boy oh boy did I get what I wanted. The teams from Forest Lake and Hastings played Wednesday evening under conditions that could be called “tolerable” by some and “brutal” by others. Heavy, wet snow mixed with raindrops covered everything – and everyone – in wet soup.

“It was pretty bad,” said Hastings coach Brian Jenson. “We had to deal with it.”

The MVPs (Most Valuable Plowers) were a couple of fathers who used snow shovels to repeatedly clear the sidelines and center line so the players and officials could see where the ball was. It wasn’t easy.

Sam McGree, Andrew Cordell and Colin Shoen each scored twice to lead Hastings to a 9-8 victory. But for both teams, the outcome won’t be as memorable as the conditions.

“We weren’t sure how the weather was really going to affect the game,” said Jenson. “We knew it was probably going to be a little sloppy, it would be wet, we would be slipping around. We made sure to just say, ‘Be careful on defense, be ready to step in if a guy falls, and we can move the ball a lot easier than moving our feet in these conditions.’ ”

As the game wore on, the moisture kept falling and everyone – including spectators – got wetter and wetter and colder colder. The scorers table was protected somewhat by a portable roof tent, and a small heater was placed on the table under the tent. At halftime, players held their hands and the inside of their gloves over the heater.

“The biggest affect it had on the guys was when their gloves got wet,” Jenson said. “Holding those metal sticks, their hands got really cold, really fast. After halftime we had the guys on the sideline keep moving, we rotated them in, we had a lot of rotations to try to keep the blood flowing. The big thing, too, was everyone was having a lot of issues but the other team was going through the same thing.”

Jenson is a 2003 Hastings graduate who played lacrosse at St. John’s University and also is the head coach of the men’s club lacrosse team at St. Olaf College. He said he has played and coached college games in similar conditions, but those were on artificial turf.

“That’s a little easier. It’s not muddy, especially right in front of the goal. Some of our kids haven’t had much experience with weather like that.”

After seeing three home games wiped out by previous bad weather, Wednesday’s game was the first at home for Hastings. And the Raiders looked sharp, wearing new white uniform tops ... even if the coach second-guessed that decision.

“I really wanted to wear our away uniforms so we didn’t get the white ones dirty,” Jenson said. “After the game, I told everyone to bring their uniforms home and ask their mom how to properly wash them.”

--See a photo gallery from the snow-swept lacrosse game on the MSHSL Facebook page.

*Schools/teams John has visited: 614
*Miles John has driven in the Toyota Camry: 8,510
(*During the 2012-13 school year)
Follow John on Twitter: @MSHSLjohn
For High-Profile Spring Athletes, Key Is Waiting And Being Ready5/1/2013
Red Wing baseball player Ryan Boldt and softball players Dana Morgan of Forest Lake and Anne Debertin of Visitation all have made college commitments, but this spring's poor weather has resulted in a slow start to their senior seasons. Brian Jerzak writes about how the trio is dealing with the situation. Read his story by clicking here.
Previous 5 Next 5