A lot of different words have been used to describe Friday’s football game between Esko and Deer River, which the Eskomos won 63-49. The words Thrilling, Exciting, and Breathtaking, were tossed around just to name a few. Now you can add one more descriptive word to that list, record setting. The record for most points scored by both teams was broken and another was tied.

The previous record for combined points in a game was set back in 2000 by Champlin Park (61) and Elk River Area (50) with 111 total points. The Esko vs. Deer River game saw a total of 112 points scored. 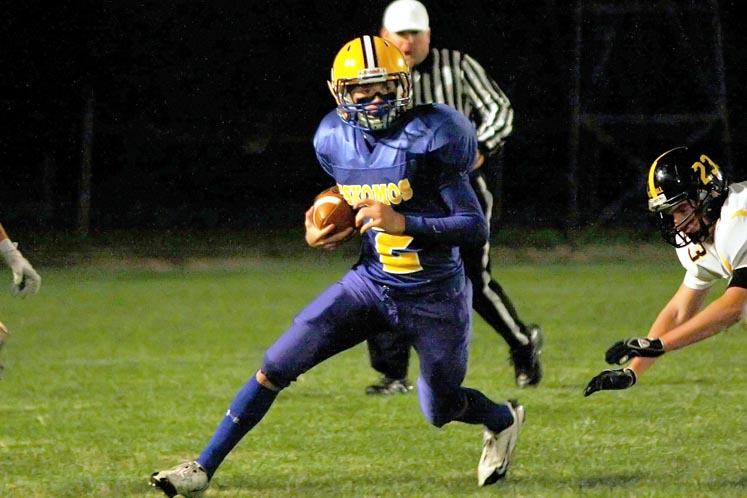 Individually, junior quarterback Max Reinertsen (pictured) scored seven rushing touchdowns and passed for one more for a total of eight total touchdowns in a game. That tied a 44 year old record set by Jerry Simonson of Franklin (vs. Echo) in 1966. Simonson’s touchdowns were all rushing, putting him at the top of the rushing category also, while Reinertsen's seven rushing td’s places him in a five way tie for second on the single game rushing touchdown list.

Reinertsen also found his way into the third place spot in the record books with a total of 46 points scored in a single game, finishing just short of DeAngelo Brackins of International Falls. Brackins scored 50 points vs. Virginia in 2006. Simonson scored 49 in the 1966 game against Echo.

For his part however, Reinertsen is quick to pass along the credit to his teammates. “I had so much nice blocking that it was easy for me to walk in. Deer River was running a 3-4 defense and we were optioning off the end. They (the defense) were really flowing, which allowed for cutbacks.” Reinertsen also talked about the effort of the entire team. “We got some great downfield blocking also; someone was always hustling and taking out the safety.”

Reinertsen finished the evening with 22 carries for 283 yards and seven rushing touchdowns. He was also 11 of 18 passing for 145 yards and a touchdown. In addition he ran for two 2-point conversions and passed for two more.

Ask about the performance, Reinertsen said he had no idea about setting any records. Actually he did not initially realize the amount of points he was involved in. “I wasn’t keeping score, I was trying to help my team win the football game, it wasn’t until after the game when a teammate mentioned that I had rushed for seven touchdowns.”

Esko Head Football Coach Bill Hudspith agreed with Reinertsen’s assessment, telling NSO. “I think that Friday night’s offensive display was both a tremendous individual effort and a tremendous team effort. We were able to run the ball and throw it. Most of Max’s runs were off option-type plays set up by the strong running of Anderson, Lonetto, and Tollerud." Hudspith was also pleased with his football club playing hard to the very end, adding. “Being able to keep up our “intensity” was another key to our success, both on the offensive and defensive sides of the ball. For the game, the Eskomos were able to rack up 575 total yards in the win.

Reinertsen’s father Ric said the family was not aware of any record until they were contacted by Northland Sports Online. “We had not given it (single game records) a thought. I am very proud of my son, but what I am happiest about though is the points came within the flow of the game, rather than in a blowout. The team was in a shootout and needed all of them.”

Wes Vork can be reached at wes@northlandsportsonline.com
Then And Now: Rogers Football Has Come A Long Ways 10/9/2010
I made a return visit to the Rogers High School football stadium Friday night. My first trip there was in 2003, when the school was brand new and the Royals faced Zimmerman in the first football game in school history.

My, how far the Royals have come.

Back in 2003, I watched the Royals practice before that inaugural game. The school had no seniors that first year and all the equipment was brand new. Part of the equation was introducing everybody. Both Rogers and Zimmerman were born of expansion in the Elk River district that year, and Marc Franz – who had been an Elk River assistant for 11 years -- has been the Rogers head coach since Day One.

After the Royals capped Homecoming week with a 53-26 victory over Becker on Friday, I asked Franz about getting from that first season in 2003 to now, when the Royals are undefeated and ranked sixth in Class 4A.

“It’s hard work and we don’t shy away from it,” the coach said. “We tell the kids that football is a hard-working game, it’s not one where you can show up and go through it half-heartedly. In today’s day and age, you’ve got to put the work in ahead of time, and these guys understand that. They’ve worked extremely hard the past couple of years and they know the work comes before the success.

“Each year it has grown and developed in pretty much every single aspect; the atmosphere at the games, the commitment of the players, the competitiveness of the program and everything. It’s been enjoyable just to watch the growth throughout the years. And there’s no one big thing if you look at what happened. Each year we did a little step, and it’s been rewarding just to see the constant growth.”

Thinking back to that first game in 2003, I remember a festive atmosphere and lots of excited people. That was exactly the scene Friday, as well. The weather was once again spectacular – 88 degrees at kickoff and 71 when the game ended – and the atmosphere was electric. There was an overflow crowd and the Rogers band, fans, cheerleaders and dance team kept the place humming.

Becker, which is now 5-1 and ranked fifth in 4A, scored 20 points in the first half. That was newsworthy, considering that Rogers came into the game with an average winning score of 47-1. The Royals began the season with four shutouts, beating Zimmerman 50-0, Elk River 55-0, Cambridge-Isanti 42-0 and St. Michael-Albertville 32-0 before finally giving up a touchdown last week in a 56-7 victory over Princeton.

So when the Bulldogs led 20-19 early in the second quarter, this was something new. But Rogers tightened up the defense and loosened up the offense in rolling to the 27-point win in the biggest game in the state Friday.

Becker and Rogers played twice last season, with the Royals winning both. They won 34-7 at Becker during the Mississippi 8 Conference season, and beat the Bulldogs again 38-0 at Rogers in the Section 5 semifinals. Rogers’ 2009 season ended in the state quarterfinals with a 56-14 loss to Totino-Grace.

The two teams know they are likely to meet again this season, as well, once the Section 5 playoffs roll around.

TO SEE A PHOTO GALLERY AND A POSTGAME INTERVIEW, GO TO THE MSHSL FACEBOOK PAGE.

--Interstate 94 has become my arch enemy (highway division). My drive to Rogers, which is in the far northwest sector of the Twin Cities, was slowed by construction on I-94 in the Maple Grove area. That was nothing compared to the return trip after the game. With the highway squeezed down to one lane, it took me 45 minutes to go about five miles. Geez Louise.

--I had a minor emergency a few seconds before kickoff. Every time I have stood on the Becker sidelines before a game, someone on the coaching staff has handed me a piece of Bazooka Joe bubble gum. (It’s a Becker tradition.) As the teams lined up to begin the game, I found myself Bazooka Joe-less. I said to head coach Dwight Lundeen, possibly with a hint of panic in my voice, “Dwight, who’s got the gum?!” He smiled, reached into his pocket and pulled out four pieces of Bazooka Joe. Crisis averted.

--As has become customary this football season, the fantastic weather is not without a down side: mosquitoes. To quote Dean Wormer, I hate those guys.

--Everywhere I go, people ask me the same question, and that was the case at Rogers. From other media people to coaches, officials and fans, people ask: “How’s the job with the MSHSL going?’ And my answer is always the same: “Fantastic. I’m doing what I love to do … hanging out at high school events and having nothing but fun.” And that’s no lie.

BY THE NUMBERS
*Schools/teams John has visited: 58
*Miles John has driven: 3,847

--Join the MSHSL on Facebook by clicking on the Facebook button on the right side of www.mshsl.org. John Millea is on Twitter at twitter.com/mshsljohn
Apple Valley Sets Boys' Soccer Record10/9/2010
The Apple Valley High School boys' soccer team closed the regular season with a 5-0 victory at Farmington on Saturday afternoon, but the bigger number from the game is 41.

That's how many consecutive games the Eagles have won, and that is a state record. They reached 40 in a row when they beat Eagan on Thursday.

Stillwater won 40 in a row from 1995 to 1997. Apple Valley is the defending Class 2A state champion and is ranked No. 1 in 2A. With Saturday's victory, they take a record of 17-0 into the upcoming postseason.

A photo gallery from today's game has been posted on the MSHSL Facebook page.

BY THE NUMBERS
*Schools/teams John has visited: 60
*Miles John has driven: 3,919


Board of Directors Update, But First … 10/7/2010
Today’s MSHSL Board of Directors meeting has begun, but let’s start the day with a great little note about the good things that happen with our Minnesota kids. Here’s an email that arrived this morning:

One of our football captains was on his way to school on Tuesday when he witnessed a very serious car accident. One car t-boned another and the car that was t-boned ended up spinning around and catching a wheel on the curb causing it to tip on its roof. Inside was a mom and I believe two children in car seats. Without concern for his own safety, he ran to the car and began to pry open the doors to get the family out. With the help of other good Samaritans, they were able to get the family to safety.

I am very proud of this young man and wanted you to know about another example of Minnesota's outstanding kids.

Thanks Joel. (I’ve asked about the identity of this young man. As soon as I know his name, I’ll post it here.)
Previous 5 Next 5